WASHINGTON — President Trump declared Monday that the appointment of the special counsel in the Russia investigation is “totally UNCONSTITUTIONAL!” and asserted that he has the power to pardon himself, raising the prospect that he might take extraordinary action to immunize himself from the ongoing probe.

In a pair of early-morning tweets, Mr. Trump suggested that he would not have to pardon himself because he had “done nothing wrong.” But he insisted that “numerous legal scholars” have concluded that he has the absolute right to do so, a claim that vastly overstates the legal thinking on the issue.

In fact, many constitutional experts dispute Mr. Trump’s position on his pardon power, an issue for which there has been no definitive ruling.

Donald J. Trump
✔
@realDonaldTrump
As has been stated by numerous legal scholars, I have the absolute right to PARDON myself, but why would I do that when I have done nothing wrong? In the meantime, the never ending Witch Hunt, led by 13 very Angry and Conflicted Democrats (& others) continues into the mid-terms!

1:35 PM – Jun 4, 2018
71.5K
68K people are talking about this
Twitter Ads info and privacy
Mr. Trump did not elaborate in the tweets about the legal basis for his claim that the appointment of Robert S. Mueller III, the special counsel in the Russia case, was unconstitutional. In that tweet, he insisted that “we play the game because I, unlike the Democrats, have done nothing wrong!”

The appointment of the Special Councel is totally UNCONSTITUTIONAL! Despite that, we play the game because I, unlike the Democrats, have done nothing wrong!

For many months after Mr. Mueller’s appointment last year, Mr. Trump avoided directly challenging the special counsel. His lawyers at the time argued that the best way to bring the probe to an end was to cooperate fully and avoid public criticism.

But that strategy changed after Mr. Trump overhauled his legal team, and in recent weeks, the president and his new attorneys have become openly dismissive of Mr. Mueller and his team of prosecutors.

Still, Monday’s tweets by the president went further than before in attempting to undermine the legal basis for the investigation into whether people on Mr. Trump’s campaign colluded with Russian meddling during the election, and whether anyone in the administration tried to cover up their activities.

The president’s assertions came in tweets just a day after Rudolph W. Giuliani, one of his lawyers, told HuffPost that Mr. Trump is essentially immune from prosecution while in office, and could even have shot the former F.B.I. director without risking indictment while he was president.

Mr. Giuliani also said over the weekend that the president “probably” has the power to pardon himself, but said on NBC’s “Meet the Press” that it would be “unthinkable” for him to do so.

Doing so, Mr. Giuliani said, would “lead to probably an immediate impeachment,” adding that he “has no need to do that. He didn’t do anything wrong.”

In his tweet, Mr. Trump again called the investigation a “never ending Witch Hunt” and said it is being led by “13 very Angry and Conflicted Democrats.”

The comments by Mr. Trump and Mr. Giuliani about the legal limits of presidential power follow a report in The New York Times that the president’s lawyers had authored a 20-page memorandum in January arguing that Mr. Trump could “if he wished, terminate the inquiry, or even exercise his power to pardon.”

In the memo, sent to Mr. Mueller’s office in January, the president’s legal team said that the president cannot, by definition, illegally obstruct any part of the Russia probe because the Constitution gives him the power to end it in the first place.

The president also tweeted Monday morning about trade, asserting that Canada has “all sorts of trade barriers” on American agricultural products. “Not acceptable,” he said. He also bragged about his accomplishments at the 500-day mark in office.

Shortly after, the White House echoed that sentiment with an email to reporters titled: “President Donald J. Trump’s 500 Days of American Greatness.” 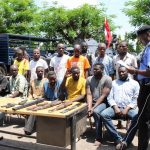