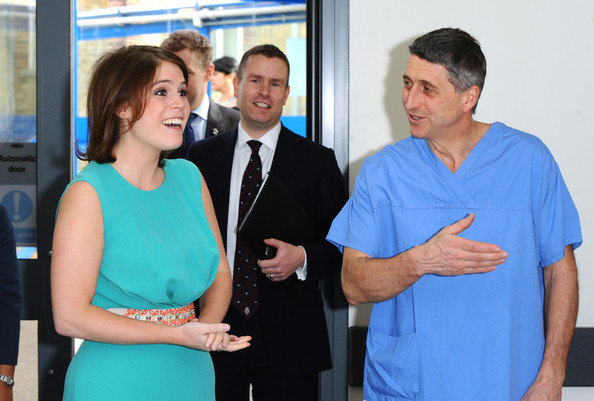 Princess Eugenie will walk down the aisle in front of the Queen, the royal family — and the NHS surgeon who helped her “stand straight”, the Duchess of York revealed today.

Sarah Ferguson said her daughter has invited the doctor who performed the life-changing operation on her curved spine to the royal wedding next Friday.

Eugenie, 28, was diagnosed with scoliosis aged 12 and underwent corrective surgery at the Royal National Orthopaedic Hospital, in Stanmore.

A pair of 8 inch titanium rods were inserted alongside her spine and two 1.5 inch screws were fixed to her neck during the eight-hour procedure.

William and Kate’s eldest children, Prince George and Princess Charlotte, are expected to be pageboy and flower girl. Eugenie’s older sister Beatrice, 30, will be maid of honour.

She added: “She did have what would have been very serious curvature of the spine. She certainly will be an extraordinary example of great work from the RNOH.

“The wedding is about love, future and inclusivity … What a huge, huge day for health, for the NHS, for the RNOH, and for hope. This is why this wedding is so beautiful — it’s hope for other children suffering from scoliosis.”

The wedding, at 11am on Friday, October 12, will be broadcast live on ITV. St George’s Chapel was where Prince Harry and Meghan Markle got married in May.

Next week some 800 guests will fill the chapel and 1,200 members of the public have been invited to watch from the castle grounds.

Eugenie, who is ninth in line to the throne, has previously spoken of her surgery and released X-ray images to raise awareness of scoliosis.

She is patron of the RNOH’s redevelopment appeal. “I’m living proof of the ways in which the hospital can change people’s lives,” she has said.

Her mother, 58, also continues to work with the hospital. Last week she visited the home of a girl about to undergo surgery to comfort her mother and explain her own experience.

The princess was under the care of Mr Lehovsky and Professor Tim Briggs when she had surgery in 2002. Mr Lehovsky will attend the wedding with his wife, Alison.

The duchess, who was speaking to the Standard to promote the work of her Street Child charity, recalled spending a fortnight in one of the hospital’s “Nissen huts” — the RNOH’s campus includes buildings dating from the Second World War — as Eugenie recovered.

She required three days in intensive care, a week on a ward and six days in a wheelchair before being able to walk again.