Deontay Wilder is so desperate to fight Anthony Joshua that he will let the Briton have home advantage, as well as the bulk of the profits.

WBC heavyweight champion Wilder, a feared power puncher who is unbeaten in 40 bouts, will accept a “60/40 split of the fight purse” and is willing to travel to Wembley Stadium in London just to get the fight done, according to Telegraph Sport.

The Telegraph spoke to Wilder’s boxing manager Shelly Finkel, who said they are eager to begin talks for a mega-fight this summer. 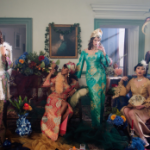