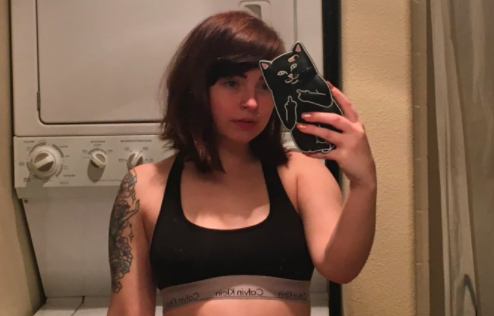 Woman dumps body-shaming boyfriend after he accuses her of having a ‘beer gut’
Yahoo Style UK Danielle Fowler,Yahoo Style UK Wed, 4 Apr 15:17 BST
Reactions Reblog on Tumblr Share Tweet Email
Beer gut
Shelby Johnson was shocked when Twitter users flocked to her side after she was body-shamed by her partner [Photo: Twitter]
A woman took to Twitter to seek advice after her body-shaming boyfriend accused her of having a ‘beer gut’.
Shelby Johnson’s partner, who remains unnamed, said he feared he would become less attracted to her in a text which read: “You’re definitely getting a beer gut babe”.

Not leaving it there, he then went on to criticise her for no longer looking like her Instagram profile, as he continued, “The main issue is your gut might stick out more than mine, and that’s weird.”

For advice, Johnson shared the series of vile messages he sent her on Twitter.

Alongside screenshots of his disgusting texts, Johnson wrote: “I am 120 pounds. I have been for about 5 months. My partner said this to me. Am I overreacting for feeling hurt by this? I’m at a loss and just can’t even comprehend how someone who claims to love me can say this.”

And to her bewilderment, the Tweet soon went viral as it garnered over 5,600 supportive comments:

One Twitter user took to the platform to write, “You deserve better and I hope you find better. You don’t deserve that.”

While another urged Johnson to break up with her boyfriend, as they commented: “Find yourself a man who loves you for you.”

And thanks to the killer support of the Internet, Johnson sought help from a therapist before breaking up with her body-shaming boyfriend.

In a moving message, Johnson told her newfound network of support: “I want to update you guys that we are broken up. He was really unhappy and felt like sh**, especially after knowing my tweet went viral. He has told me he’ll use this as a learning experience to be a better person.”

She added, “And here I am, single and free”.