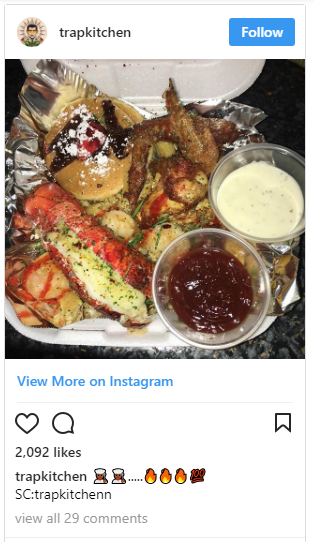 The south London entrepreneur who built a takeaway business on Instagram with 70,000 followers… from his mum’s kitchen in Camberwell

A south London entrepreneur is set to open his first restaurant in Manchester after running a takeaway business with thousands of customers on Instagram.

Prince Cofie Owusu, known as Shakka, launched Trap Kitchen in 2016 from his mum’s flat on a housing estate in Camberwell – and has since amassed more than 70,000 followers online.

At its peak the social media phenomenon, open Monday, Wednesday and Friday, served more than 200 meals a night and earned up to £10,000 a week.

Now, following an appearance on the BBC’s Million Pound Menu in June, the 27-year-old is opening his first shop in Manchester and is fielding offers to open a permanent site in London.

Offering an eclectic menu with influences from soul food to Chinese to African American cuisine, Mr Owusu rose from being unemployed to dishing up meals to a devout fan-base including Victoria’s Secret Angel Leomie Anderson and grime artist Stormzy and rapper Wiley.

To date the takeaway business has been run entirely online, with customers drawn in via photos of the brand’s offerings including its £20 “Baller Combo” takeaway boxes filled with spiced lobster tails, Cajun prawns, mac n’ cheese, chicken and a side, such as Belgian waffles topped with strawberries. 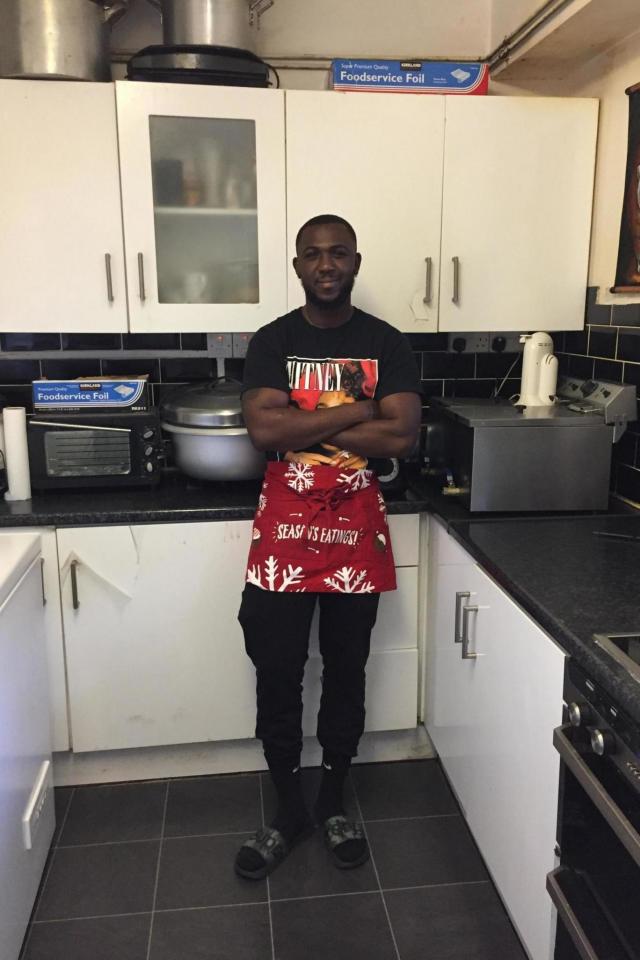 People would see what the kitchen has on the menu for the day online, call up to place an order via the number in the Instagram bio, and then queue up outside Mr Owusu’s home for up to three hours to collect it.

But with Trap Kitchen’s earnings swiftly outgrowing its Instagram feed, Mr Owusu has put the London joint on hiatus to scale up to a fully-fledged restaurant. “I knew that we were doing a lot better than the High Street, and I put a stop to it,” Mr Owusu told the Standard.

Speaking of how he managed his unprecedented financial success, the south Londoner said, “It was a start-up business, so [money] wasn’t something I thought about. Now we are in a position where we have to do everything by the book, so we are in the process of that.”

The entrepreneur said it’s all down to social media. Through a process of tagging influencers in his pictures, and sharing increasingly creative flavour combinations, Mr Owusu’s following “snowballed” within the space of a year as people began to spread the word. 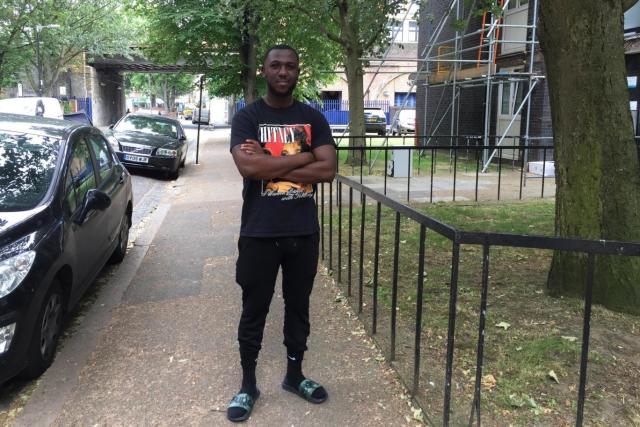 After posting its first picture in June 2016, Trap Kitchen is now notorious within the urban music scene and fashion industry (supermodel Jourdan Dunn being another enthusiast), and people have been known to travel from as far as Amsterdam and France for a box.

Mr Owusu said his success online is indicative of larger shift in the food industry. “To build this up and have more followers than high street restaurants just goes to show how times are changing. It’s opening space for the little people like me,” he said.

The entrepreneur has been cooking since the age of 9, with his mum, from Ghana. While she was out at work at an old people’s home, he began to experiment with food creations for himself and his younger brother, creating his own genre of “Trap food”.

Trap Kitchen was borne out of Mr Owusu’s desire to share pictures of his meals online for fun. “I was at home, I didn’t have a job and I was just at Mum’s house thinking ‘what am I going to do with my life’,” he says.“Then I started taking pictures of my food, for myself, and putting them on Snapchat and Instagram.”

He added: “People started commenting and asking about it. One day a girl messaged asking me if I was selling it. She asked me how much, I said £15 and then she came from Dulwich to get it.”

From there it was all about the “graft”. On a normal working day, the entrepreneur will wake up before dawn to go to Billingsgate market for his prawns, head to Brixton for his lobster and chicken and sides, before prepping until 3pm and serving until 11pm.

He said he adopted the word “Trap” – sometimes associated with selling drugs – to reflect this. “For me, to trap is to graft,” he says. “It’s to rise above potential.”

And the south Londoner aims to share this ethos among his local community. He employs young men from the local area in a bid to keep the teenagers out of violent crime.

Mr Owusu said: “In this area there’s a lot of gang violence. I’ve always felt that it would be good to take them off the streets… I’m definitely looking to do that going forward. You’ve always got to look out for the community especially if you are in a more advanced position.”

However, the break-out business has not been without its difficulties. On Fridays, Mr Owusu said Trap Kitchen received its fair share of complaints from suspicious locals, with the police often called. “The police would come and see a lot of black boys, which to them rings alarm bells,” he said. “But after a while that stopped.”

Yet there’s no shady side to Trap Kitchen, and business is thriving. Mr Owusu is in the final stages of setting up a second operation in Manchester.

The shop is due to open in the next couple of weeks on Hillkirk Street near to the Manchester Regional Arena. “I’m going to try and centralise this kitchen, and have prepped food delivered up there – similar to how Nando’s do it,” he said.

Meanwhile Trap Kitchen is ready to fly the nest in south London. Following the BBC programme, Mr Owusu has had offers of investment or pop-up opportunities in London, and is seeking a permanent site. But as the entrepreneur is still weighing up his options, Trap Kitchen’s hungry fans in the capital may have to wait just a little longer for their fix.