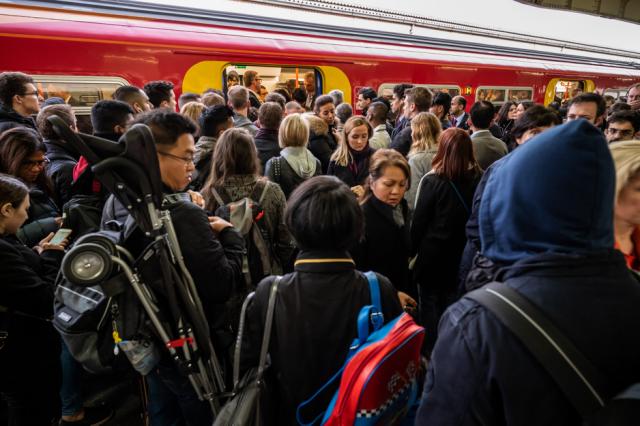 Trains serving London Waterloo, the UK’s busiest station, and more of the country’s busiest routes will suffer disruption as the strike gets under way on Tuesday.

Rail, Maritime and Transport (RMT) union members on SWR will mount picket lines outside stations, with almost a third of services being cancelled between now and Friday.

Only half of all services are expected to operate on Saturday.

A five day strike on South Western began on Tuesday (PA)
The union is also planning a series of 24-hour strikes on Saturdays in November, which will hit tens of thousands of rugby fans travelling to and from Twickenham, where England are playing international games.

SWR were yet to publish its plans for Saturdays in November, saying it will be liaising with Twickenham stadium and the RFU.

“We have guaranteed a guard to be rostered on every single service, and our growth plans mean more guards, not fewer. It is time for the union to stop spreading myths and causing misery to our customers and colleagues, and commit to resolving this dispute.

“We will do everything we can to keep our customers moving and reduce disruption.”

Disrupted: South Western Railway will be running a reduced service during the planned strikes (South Western Railway )
RMT general secretary Mick Cash said: “SWR has stalled the talks process and has failed to provide any sort of offer that comes close to resolving this dispute which matches the widespread best practice in the industry, underpinned by the guard guarantee.

“Our dispute is about safety, security and access on SWR while the company look to open up a loophole that would allow them to run services driver-only at their discretion.

“Recent figures have shown a shocking surge in violence on our railways. It is, frankly, appalling that SWR are looking for a green light to throw the guard off their trains as and when they see fit in the name of profit.

“SWR might think it’s acceptable to play fast and loose with passenger safety, security and access, but RMT members, who have stood firm throughout this dispute despite appalling harassment from the company, will not accept a dilution of the safety regime on the railway.

“There’s a simple solution to this dispute and it means SWR stop playing with words and negotiate the guard guarantee that reflects the safety values of the agreements RMT has pinned down in other parts of the rail industry.”