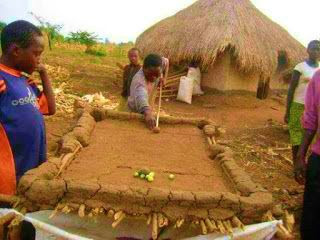 In the midst of poverty and diseases, Africans are naturally healthy and happy. A locally made clay pool board in a village

It may be likely that many doubt if at all there is happiness in Africa, because, among all the continents, Africa has suffered all kinds of internal and external atrocities, including slavery, colonial aggression, wars, ethnic conflicts and medical crimes, such as Aids, Lassa fever, and Ebola.

As a matter of fact, there is happiness in Africa probably more than any continent on the earth. Why would I make such an assumption when I haven’t carried out any research?

The reason is simple and logical. Among all the seven continents in the world, Africa is regarded as the poorest, but has the lowest suicide rate, compared to Europe and America.

The challenges Africans face right from birth to adulthood, can be compared to the training amateur soldiers have in the developed world.

Some rural students could walk over a mile to school. Some pupils carry their tables and chairs to school and bring them back home after classes. With such a hard daily life routine, Africans grow to be one of the toughest creatures able to withstand pressures and problems.

Read more: Happiness Made In Africa