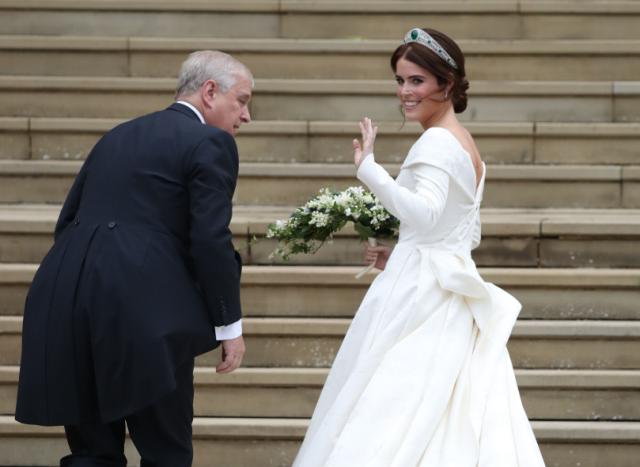 True to her word, Princess Eugenie arrived at her wedding to Jack Brooksbank proudly showing off the scars from her childhood surgery.

The bride specifically requested that her low-backed gown, designed by Peter Pilotto and Christopher De Vos, should reveal the results of the operation she had at the age 12, after scoliosis caused a curvature of her spine.

The princess had two 12-inch metal rods inserted in her back in the eight-hour operation, which took place in 2002 at the Royal National Orthopaedic Hosptial.

In a further nod to her condition, Eugenie’s surgeon Jan Lehovsky and other RNOH staff are among the guests at St George’s Chapel today.

MORE: Princess Eugenie’s wedding includes a reading from The Great Gatsby – and it’s left people puzzled
MORE: Potholes causing twice as many breakdowns as they did 12 years ago

Eugenie, 28, said before the wedding: “I think you can change the way beauty is, and you can show people your scars and I think it’s really special to stand up for that.

“The Royal National Orthopaedic Hospital, the RNOH, is a huge charity — I’m patron of their appeal and I had an operation when I was 12 on my back, and you’ll see.

“But it’s a lovely way to honour the people who looked after me and a way of standing up for young people who also go through this.”

It isn’t the first time the princess has opened up about her condition.

Earlier this year, on International Scoliosis Awareness Day, she shared on Instagram X-Ray of her spine revealing the metal rods she’d had inserted.

“I’m very proud to share my X Rays for the very first time,” she wrote in the accompanying caption.

“I also want to honour the incredible staff at The Royal National Orthopaedic Hospital who work tirelessly to save lives and make people better. They made me better and I am delighted to be their patron of the Redevelopment Appeal.”

In a shared blog post about her story, Eugenie went on to reveal how life-changing the surgery had been.

“Without the care I received at the RNOH I wouldn’t look the way I do now; my back would be hunched over,” she revealed.

“My back problems were a huge part of my life, as they would be for any 12-year-old. Children can look at me now and know that the operation works. I’m living proof of the ways in which the hospital can change people’s lives.”

Recent Statistics have revealed that scoliosis is more common than you might think affecting up to 2-3% of the population.

Though scoliosis can happen at any age, the most common time is around age 10 to 15 when a child is in early adolescence.

According to the Scoliosis Association, scoliosis can affect sufferers’ appearance because when the spine bends to the side it can also twist, which can pull the ribcage out of place.

The NHS says scoliosis doesn’t normally improve without treatment, but it isn’t usually a sign of anything serious and treatment isn’t always needed if it’s mild.

For children and adolescents treatments can include a plaster cast or plastic brace fitted around the back to stop the curve getting worse as they grow, or surgery, like Princess Eugenie had, to insert metal rods into the back and straighten the spine.

Adults may need treatment to relieve pain, such as painkillers, spinal injections and, very occasionally, surgery.