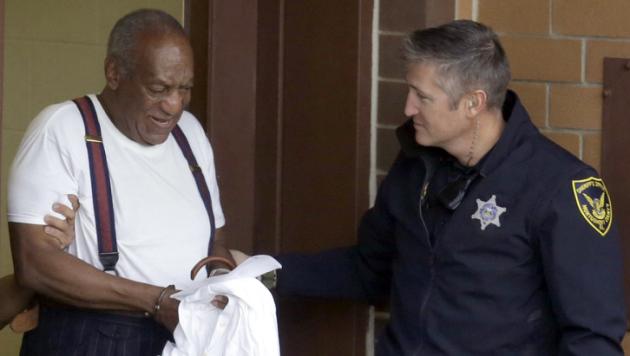 Just under two weeks after Bill Cosby went behind bars for three to ten years for the 2004 rape of Andrea Constand, the disgraced comedian’s lawyers are now trying to not only get him out of the big house but have the case and the judge tossed too.

“The defendant, William H. Cosby, Jr., moves this Court for a new trial in the interest of justice, or at least for reconsideration and modification of the sentence imposed on September 25, 2018,” a defense motion filed in Pennsylvania state court on Oct. 5 and made public this weekend declares.

Found guilty in an April retrial of three counts of aggravated indecent assault, and facing up to 30 years, the much accused Cosby saw the charges collapsed into one with a maximum of a decade in state prison. Formally labeled a sexually violent predator as well by Judge Steven O’Neil at the Sept. 24-25 sentencing hearing in Norristown, PA. the man once known as “America’s Dad” was taken away in cuffs and chains to begin to serve his time.

Denied home arrest or bail Cosby already had an appeal attorney in the courtroom with him and promises of filing a motion on the matter — as he now has.

Having gained zero traction at the Supreme Court with his duo of petitions, this new-ish document cites a litany of supposed errors on the part of Judge O’Neil in both the initial mistrial of 2017, the retrial of this spring and the sentencing hearing late last month. Among those and other arguments that have floundered in previous motions and incarnations, Cosby’s latest set of attorneys Joseph Green, Jr. and Peter Goldberger additionally claim that a vital taped piece of evidence was “not authentic,” the statute of limitations on the crime may have expired and that testimony from five other accusers at the criminal retrial “violated the defendant’s right at sentencing.”

Related Brett Kavanaugh Confirmed To Supreme Court: Hollywood, Politicians, Media React
Contained in those arguments is also a renewed attack on Judge O’Neill after he twice before refuted their desire to see him recuse himself from the case.

“For the reasons detailed in Mr. Cosby’s previously-filed motions for recusal (which are incorporated here by reference, without being repeated and set forth at length), and for all the foregoing reasons, a reasonable observer could question the impartiality of the judge who imposed the September 25, 2018, sentence,” the 10-page wide-ranging filing says. “Accordingly, Judge O’Neill should have recused himself from imposing sentence,” it throws in.

Having charged Cosby in late 2015 to be within the Keystone State’s longer than most statute of limitations, Montogomery County District Attorney Kevin Steele mocked the tape tampering allegation at a post-sentencing press conference on September 25. “If that’s what they’ve got, it’s beyond a Hail Mary,” he said standing next to former Temple University employee Constand. “This is nothing new, maybe its new for these defense attorneys.”

The D.A.’s office is expected to reply to the defense motion and seeking of a hearing in a filing of its own within days. At the same time, Cosby’s wife of 54 years, Camille, is seeking to have O’Neill investigated by the state for “misconduct” in the trials.

Even as Cosby has admitted in depositions more than 10 years ago to giving Constand several Benadryl pills on the night of the alleged assault in his Philadelphia-area mansion back in 2004, the actor has insisted unsuccessfully through various investigations, two trials and the sentencing hearing that the encounter with her was consensual.

Many of the more than 60 women also have claimed that Cosby drugged and assaulted them over the decades with a similar combo of pills and alcohol. Unlike many of those women, some of whom were at the two trials and the sentencing hearing last month, Cosby paid Constand millions in a once-confidential settlement about a decade before the criminal case was opened in late 2015.

Now a new chapter in this case has been opened… at least for now.